The A-Trane was opened in late 1992. It is located in Berlin-Charlottenburg at Bleibtreustrasse 1 where its doors open every night at 9 pm. Uncounted locally and internationally renowned musicians have played the club, including Wynton Marsalis, Herbie Hancock, Lee Konitz, Brad Mehldau, Larry Coryell, Diana Krall, Esbjörn Svensson and Till Brönner. It is one of the venues of the annual JazzFest Berlin. Numerous live jazz albums have been recorded at the A-Trane. On Saturday nights after the regular show there is "Jazz after Midnight", the weekly jam session. The club accommodates no more than 100 people that gather around the 12 square meter bandstand.

Since 1997 the club's owner and manager is the former designer/illustrator and professional basketball player Sedal Sardan, who regularly acts as MC. The club was named after John Coltrane (nicknamed "Trane") with a reminiscence to the Duke Ellington standard "Take the A-Train".

The A-Trane is widely considered one of Europe's most important jazz clubs and was honoured with the Live Entertainment Award (LEA) in the category "Best German Jazzclub" in April 2011. Source 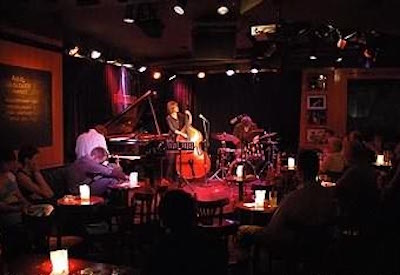 We currently have no events scheduled for A-Trane. Please check out their website to see if there's anything we might have missed.

For the full programme please visit the A-Trane website.

Be the first to know what's new on Jazzity!